Business News / Is democracy dying? Here’s what an expert says

Is democracy dying? Here’s what an expert says What can be done to protect democracy?

Arizona State University’s Center for Work and Democracy will address that thorny question in its fall conference, to be held inside the Ventana Ballroom of the Memorial Union on the Tempe campus Aug. 26–27.

The conference will include activists, organization leaders and academics that will address issues — in the context of an authoritarian threat — such as diminished voting rights, conditions for working people and violent policing.

Marcia Howard, vice president of the Minnesota Federation of Teachers, and Dave Regan, president of United Healthcare Workers West/SEIU, will be the keynote speakers, and a late afternoon panel on Aug. 26 will address the book “Degenerations of Democracy,” which was published in July and co-written by Craig Calhoun, a University Professor of social sciences at ASU.

ASU News talked to Calhoun about the book.

Editor’s note: The following interview has been edited for length and clarity. 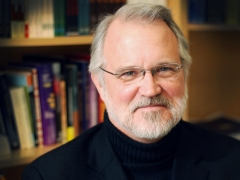 Question: Let’s start with the title. How has democracy degenerated?

Answer: Democracy is a project and something people do. It’s not just a settled state of affairs, like, oh, if you have elections, that’s the story. And it’s a project of trying to create greater liberty, equality and solidarity self-rule by the people. When it stalls or is blocked, it degenerates, develops pathologies and loses some of the advances it has made. The institutional mechanisms are undermined.

Q: How has it been stalled or blocked? And is this a recent phenomenon?

A: Let me answer in reverse order. We mislead ourselves if we try to understand our current problems with a short-term perspective. The issues are rooted in larger social transformations, particularly in the way in which the broad post-war boom years saw advances in democracy in several different ways. After World War II and up until the early 1970s, equality was increased in the United States. There was increased voter participation. Then we start getting movements to limit that. So, we’re (the authors) suggesting that we need to have at least a 50-year perspective on these degenerations to see them well.

How does degeneration take place? It takes place institution by institution, based on shifting social conditions that damage democratic processes directly — for example, when people try to block voting rights for their fellow citizens but also indirectly by advancing polarization and creating extreme splits in the country. So that it’s hard for us to say, “We the American people.” People use that phrase, right? But they tend to mean the American people on my side, not the other side.

Q: Given how polarized our current political climate is, do you think the foundation of democracy is stable enough to survive?

A: I’m optimistic, but I see the reasons for pessimism. I think things are really difficult. I think we could lose democracy in the United States and in some parts of the democratic world. I don’t think the die is cast, but it’s up to us to take action, to try to renew it and rebuild it. That means overcoming the polarization, not just winning from our side. It will take movements. It will take struggle. It will take work we’re not quite ready for because we have to escape some of these polarized, knee-jerk reactions. At the same time, a longer historical perspective tells us we’ve come close to losing it before. One time, that resulted in a massive, hugely devastating Civil War, so it’s not a very optimistic story. But often since then, there’s been a sort of two steps forward, one step backward movement. And you can say we’re in one of the backward phases.

Q: What does the loss of democracy look like?

Q: Around the world and in the United States we see a nod to populism and even authoritarianism. How does that play into the degeneration of democracy?

A: Populism is always present in democracy because there’s always a question about who are the people and are they being listened to? But it can be a problem when it gets attached to really terrible ideologies or to bad individual leaders. And there is a temptation to authoritarianism if progress isn’t being made through regular electoral or other institutionalized means, or through ordinary social movements. People start to say, “What we need is a strong leader to really represent us.” And that is the slide from populism into authoritarianism, the belief that a strong man, a man on horseback historically, was going to save us.

But I think we need to remember that people are the basis of democracy, and we can’t give up on the people. We have to find ways for the people to gain greater empowerment. And that’s not by authoritarianism, which ultimately disempowers the people, but it’s also not by saying, “Oh, we just have to have conventional elites run things and the people should know their place.” That’s not right, either.

Q: In your book you say it will be movements, not policy, that restores democracy. Why is that?

A: The reason we need movements is because populism arises out of change. We’ve had huge transformations the last 50 years. The range of cultural changes that have come about, the role of women in society, the openness toward people with different sexualities. … Some people are enthusiastic. Some people are saying, “Wait a minute, you’re changing my country out from under me.” So, what gives rise to populism is transformations that people experience as disempowering. They may be right or wrong about that, but that’s how they feel. The result is, there won’t simply be narrow policy fixes to deal with these problems. You can deal with some of the issues, like, say, voting rights. But can you have a policy fix on the basic issues of inequality and social change? No. You’ll have movements, like the trade union movement or Black Lives Matter or the religious evangelical movement.

A: It’s hard for me to disentangle where I see it and where I want to see it. Where I see democracy, when I’m feeling optimistic, is a reconstruction of social solidarity, as basic as social connections and integration and mutual support. … I would like to reduce inequality, not to flat equality, but to less extreme levels of inequality. I’d like to see that reflected in universities and elsewhere. So I see rebuilding the institutional basis for democracy. Then, I see rebuilding the conditions to participation in voting. Finally, I’d love to see democracy thriving more at local and middle levels, communities and states.

Q: That’s what you’d like to see. Is that what you think you’ll see?