Will Arizona see a recession? Here’s what experts say Arizona State University economist Dennis Hoffman is fascinated by weather. In a different life, he’s an oceanographer, focused on running simulation models to predict weather patterns or events. Instead, Hoffman’s reality is grounded in numbers, although forecasting is a major part of his career. As an economist, Hoffman runs business cycle models to predict the state of the economy. So, what’s the economic forecast? And will Arizona see a recession?

“Storm clouds on the horizon, but it’s not completely definitive that they’ll come our way,” says Hoffman, ironically in a studio space on the Tempe campus that could be used by a TV meteorologist.

Over the course of the pandemic, there have been many predictions or estimates about the health of the economy. Right now, the biggest question is: Are we in a recession? Or, are we headed there? But then, who makes the call?

It’s not the media, or everyday people, although there is no shortage of opinions. The job falls on the National Bureau of Economic Research, a nonpartisan, nonprofit research organization tasked with looking at the most accurate economic reporting tools to make the decision.

On a daily basis, economists also use some of those tools, like an economic index, to forecast the health of the economy. Take for example, the U.S. Bureau of Labor Statistics’ Consumer Price Index, which measures the average price of consumer goods and services and how those prices change over time.

But there are also nontraditional indices, like the buttered popcorn index or the coupon redemption index, although Hoffman warns, any indices or economic indicators that are tied to consumer sentiment, while fun, are generally not the most accurate ways to estimate the health of the economy, or if the “R” word is looming. Indices are sort of like barometers. They provide an indication of pressure points that are changing but need not be perfect predictors of recession.

With this in mind, ASU News asked Dennis Hoffman, the director of the Office of the University Economist at ASU, about the history of the economic index, why inflation seems to be affecting people differently and whether the economy looks like it’s headed for a recession. 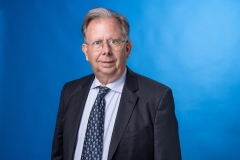 Question: What is an economic index and how do economists use them?

Answer: For centuries, businesses have been trying to get a read of economic conditions, or the health of the economy, so they can plan, hire, order products; so they can try to make sales. That exercise became more sophisticated approximately 100 years ago, say post-World War I, especially in the (19)20s, when we had the postwar expansion; people started to track the health of the economy. We came out of some pretty tough economic times: take the war, take the Spanish flu, which hit the global economy hard. We came out of that in the (19)20s, and people began to see this economic vibrance and they tried to measure how fast it would grow, how long it’ll last and what are some of the warning signs in the economy that may signal an impending downturn.

The Purchasing Managers’ Index is a very good index. It’s a survey of purchasing manufacturers. These are the people who order inputs, products, basic components of production. And these are the people on the front line making these orders. If they’re ordering more, they’re seeing good times ahead, and we want to measure those increases in orders. If they’re ordering less, they’re cautious, and maybe it’s a change in “barometric” pressure that’s signaling headwinds ahead, storm clouds ahead or a downturn coming. We also have non-manufacturing purchasing managers indices today to kind of get a gauge of what’s going on in the service side of the economy. I prefer indices that tell me what businesses are buying. I think they’re far better than consumer confidence indices that can often reflect the latest story they heard on cable news.

Q: What type of indexes should we be looking at in Arizona, to measure the economic health of the state?

A: Try as we may to diversify our economy, Arizona is a people magnet. People flock to the state of Arizona, and as a result, our real estate industry is really robust. In fact, a lot of the movers and shakers in Arizona made a significant amount of money in investing and developing real estate in the state. Unfortunately, that’s a cyclical business. Any kind of an index of real estate would be very useful in predicting economic activity in the state of Arizona, despite the fact that we’re pretty diverse today in terms of our industrial base. As goes the real estate cycle in Arizona, so goes the health of the economy. We’ve seen a robust recovery in Arizona, and along with that, a robust real estate movement over the last 12 months in the state. Question is: What does the future hold for us?

Q: Are we in a recession?

A: Well, that’s the big debate among economists right now. Let me tell you what the recession hawks are basing their argument on. We have had, over the last, let’s say eight to 12 months now, unanticipated inflation that has put federal reserve board members back on their heels, and they’re a bit surprised by this. These people are in control of the nation’s monetary policy, and they’re trying to keep prices stable, while maintaining near full employment. They’ve done a great job on both in recent years, except for the last year. And what they’re doing is rapidly tightening money and credit, which will dampen the demand for goods and services.

The last time we had a situation like this, where the federal reserve stepped in and rapidly tightened money and credit, was in the early ’80s, and we had a moderate to severe recession in 1982. Many economists point to that particular episode, saying it’s going to be virtually impossible for the federal reserve to slow the economy and wring out inflation without triggering a recession.

If you’re saying that we’re not going to have a recession, what you’re pointing to is the fact that the consumer is unbelievably healthy. The job creation is off the charts. We get 500,000 new jobs plus most months for the last 18 months. This is unprecedented. So we really have, in many ways and shapes, a very healthy economy, solid balance sheets, a lot of pent up savings, a lot of new jobs being created. That’s not necessarily a recipe for a recession.

So, you’ve got the hawks on one side and the hopefuls on the other. And if the root cause of inflation is shortages of goods, increased production that increases supply will be an even better remedy that dampening demand with a Fed tightening cycle.

Q: If we enter a recession, what’s the contributing factor? Is there more than one?

A: The causal factors for this particular episode, I think, are going to be investigated for decades. Picture PhD thesis after PhD thesis written on this particular subject. There’s a little episode in the late ’40s, actually, that I think should be investigated because I think it’s quite similar. Coming out of World War II, people were breathing a sigh of relief because we were coming out of dark times. The ’30s were a disaster; couple that with a war, people wanted to live, buy products, move on. But supply chains were disrupted, and we had a bout of inflation. We had interruptions in production, kind of like we had the last two quarters, where GDP fell but we continued to create a lot of jobs. So that was not defined as a recessionary period, but it was a period of duress.

People don’t like to hear this because we’re sick and tired of COVID, we’re sick and tired of the pandemic, but this left an indelible mark on the economy. It is without precedent in history to shut down the U.S. economy and the better part of the world economy. And some of those shutdowns were prolonged throughout the world, especially in Asia. Reopening was always going to be a challenge because immediately after we shut down, guess what? Folks sat at home and ordered products off online suppliers since they weren’t able to travel or consume services.

Initially, during the shutdown, manufacturers and good suppliers decided to slow down production, but quickly received signals to ramp up. But they had to ramp up at a time when Asia was still shut down. You can’t build cars today without semiconductors. You have manufacturing facilities that were established over the last 15 to 20 years with unbelievably efficient, “just-in-time” inventory control, sourcing products from around the planet, and overnight, and then we blew that system up. Now people are upset because they can’t get goods. And of course, the federal government got worried whether people had enough cash, so they dumped a whole bunch more (in the form of stimulus checks) in both spring of 2020 and spring of 2021, which both political parties supported. So you have an incredible amount of money chasing a shortage of goods, which is a recipe for inflation.

The cure: slow down demand and/or get those supply chains back in order.

Q: Why does it seem like inflation is impacting people differently?

A: The problem with a recession, the problem with inflation is that it doesn’t hit everybody the same way. Folks that work from home, own their own vehicles, own their home, have a secure job, don’t have to commute anymore, have steady paychecks, haven’t had severe disruptions from the pandemic — they’re doing well. In contrast, picture individuals in Phoenix that are working on the east side of the Valley, because that’s where the preponderance of jobs are in Phoenix metro, but they’re living in the West Valley because that’s where they can afford to live; and they’re paying rent in the West Valley and commuting across town. So, their rental costs are way up. Gasoline prices are high. They had to spend way too much to get a used car because their old used car gave out on them. Those folks are in tough straits, even as job demand for their services is fairly healthy. So, picture a situation where we slip into recession. Let’s suppose they’re tied to the construction or real estate industry and real estate really slows; they might be laid off. So now you’ve got higher rents, higher commuting costs, a higher cost for your car and your job is threatened. That’s a challenging situation. So you’ve got a group that is prospering and a group that is not.