Arizona added 6,500 jobs over the month in November (seasonally adjusted), according to the latest employment situation release from the U.S. Bureau of Labor Statistics. That was close to the average over-the-month job change during the 2015-2019 period, but significantly slower than October.

Since June, Arizona’s over-the-month job growth has averaged 12,600. At that pace, it will take eight months for the state to regain its February employment level.

Most of the jobs added over the month in November were in transportation and warehousing, followed by leisure and hospitality. Professional and business services; government; other services; and information lost jobs.

As Exhibit 1 shows, job growth has been uneven across the state’s metropolitan areas. Jobs in Flagstaff are still 17.4% below February, while jobs in Prescott (-0.3%) and Sierra-Vista Douglas (-1.4%) have nearly recovered. In November, jobs in Phoenix and Tucson were 2.9% and 4.1% below February, respectively.

The Arizona unemployment rate fell slightly in November, to 7.8% from 7.9% in October (seasonally adjusted). Arizona’s rate was above the national rate of 6.7%.

As Exhibit 2 shows, Arizona’s personal income declined at an annual rate of 8.6% from the second quarter to the third. Even so, that was better than the U.S. and many states. (Release available here). https://www.bea.gov/data/income-saving/personal-income-by-state

Exhibit 2: U.S. Personal Income Growth by State, Annualized Percent Change from the Second Quarter of 2020 to the Third Quarter 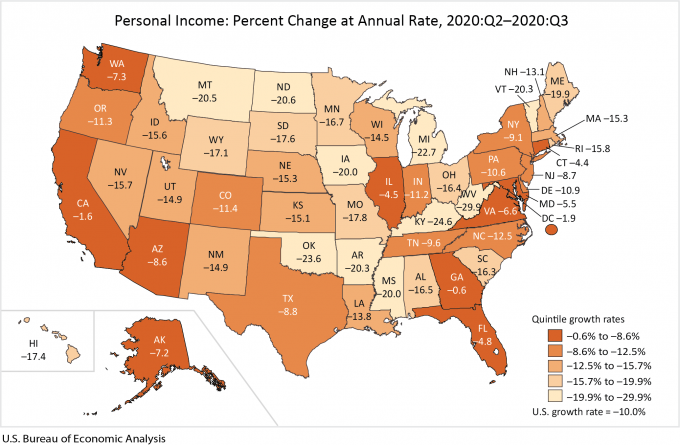 Income from dividends, interest, and rent fell by 2.3% over the year in the third quarter, which followed a 1.2% decline in the second quarter.