Arizona in top third of states with people working from home READ ALSO: Do tattoos affect your likeliness of getting a job?

The U.S. trade deficit made a sharp drop in July, moving down $10.2 billion from a revised June figure of $80.9 billion. The $70.6 billion deficit figure reported in July was the lowest since October 2021. This was driven by a $9.7 decrease in imports but also a $0.5 billion increase in exports from June. Year-to-date, the goods and services deficit increased by $136.6 billion, or 29.0%, from the same period in 2021 based on the joint U.S. Census Bureau and Bureau of Economic Analysis September 7 release. 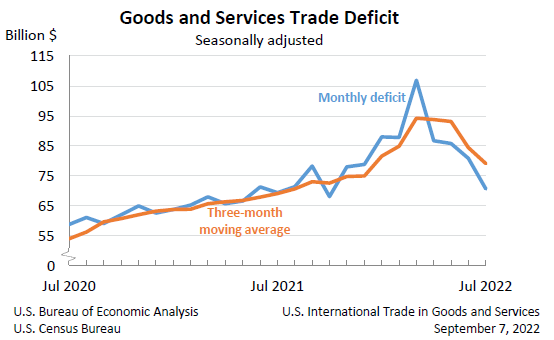 Author: Valorie H. Rice is the Senior Business Information Specialist at the Economic and Business Research Center (EBRC) in the University of Arizona’s Eller College of Management. Shaw Zeider is a student researcher.