Business News / Here’s how many Californians have moved to Arizona

Here’s how many Californians have moved to Arizona READ ALSO: Here’s how much housing affordability has dropped in Arizona 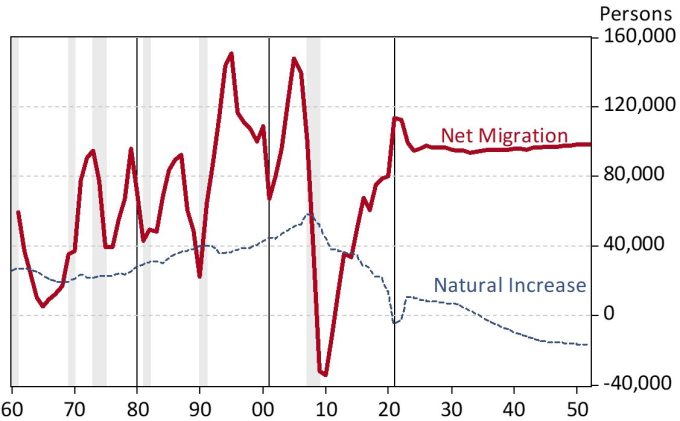 What states send the most migrants to Arizona? And how many Californians have moved to Arizona? We can get a good idea from the U.S. Census Bureau’s American Community Survey. Their five-year estimates for the 2016-2020 period show that Arizona drew migrants from every state in the nation (Exhibit 2). It’s also clear that California sent by far the most migrants of any state.

Exhibit 3 shows how domestic migrants to Arizona were distributed across Census regions. As the exhibit shows, during the 2016-2020 period 268,461 migrants moved to Arizona each year on average. Most of those migrants came from the West (138,185 or 51.5%), followed by the South (20.6%), Midwest (20.6%), and Northeast (7.3%). The distribution was fairly similar for migrants to the Phoenix MSA and the Tucson MSA.

Exhibit 3: Annual Gross Migration Flows Into Region by Census Region of Residence One Year Ago, 2016-2020

Exhibit 4: Annual Gross Migration Flows Into Region by Top 10 State of Residence One Year Ago, 2016-2020 Exhibit 5 shows gross domestic migration to Arizona, Phoenix, and Tucson by state (and the District of Columbia).

Exhibit 5: Annual Gross Migration Flows Into Region by State of Residence One Year Ago, 2016-2020