What a new Corporation Commission chair, energy rules could mean for Arizona

Peterson made several of her goals clear: streamline processes and regulatory mechanisms so as to ensure public faith in the Commission, work with the Legislature and governor on important energy issues, and “revisit and reinforce our pending Clean and Affordable Energy Rules to accomplish progressive outcomes through the use of conservative principles and regulatory mechanisms.”

Marquez Peterson has a track record of working with legislators and the Governor’s Office to synthesize their power and expertise towards positive energy outcomes — for consumers, in the form of lower rates, and for utilities, in the form of policy conducive to expanding carbon-free energy sources.

In 2020, Democrat Anna Tovar also won one of the three seats up for election, campaigning on expanding renewable energy. Her campaign site lists it as her main policy priority, saying “[Arizona] need[s] to continue expanding [its]use of solar energy, not to mention all forms of renewable energy.”

The Commission in 2020 voted 4-1 to adopt a 100% clean energy by 2050 goal, confirmed by 3 Republicans and 1 Democrat. The passage of the package hinged on the removal of the “technology requirements” which were seen by many as an effort by the Commission to overreach and manage which contracts utilities would award.

Chairwoman Peterson led the effort to eliminate the proposed “technology requirements” that she argued would allow utilities to “simply invest in renewables to comply with the rules and be guaranteed to recover the money from ratepayers,” rather than make “prudent decisions.”

Focused on ensuring that the rules package did not over-regulate and mandate which entities utilities awarded contracts to, Chairwoman Peterson ensured that “nuclear, natural gas, and forest biomass” would “be allowed to help with the transition to ensure reliability and affordability through the process.” She believes that the Commission shouldn’t “pick winners and losers”, and that the free market is vital to effective energy policy and conservation efforts. 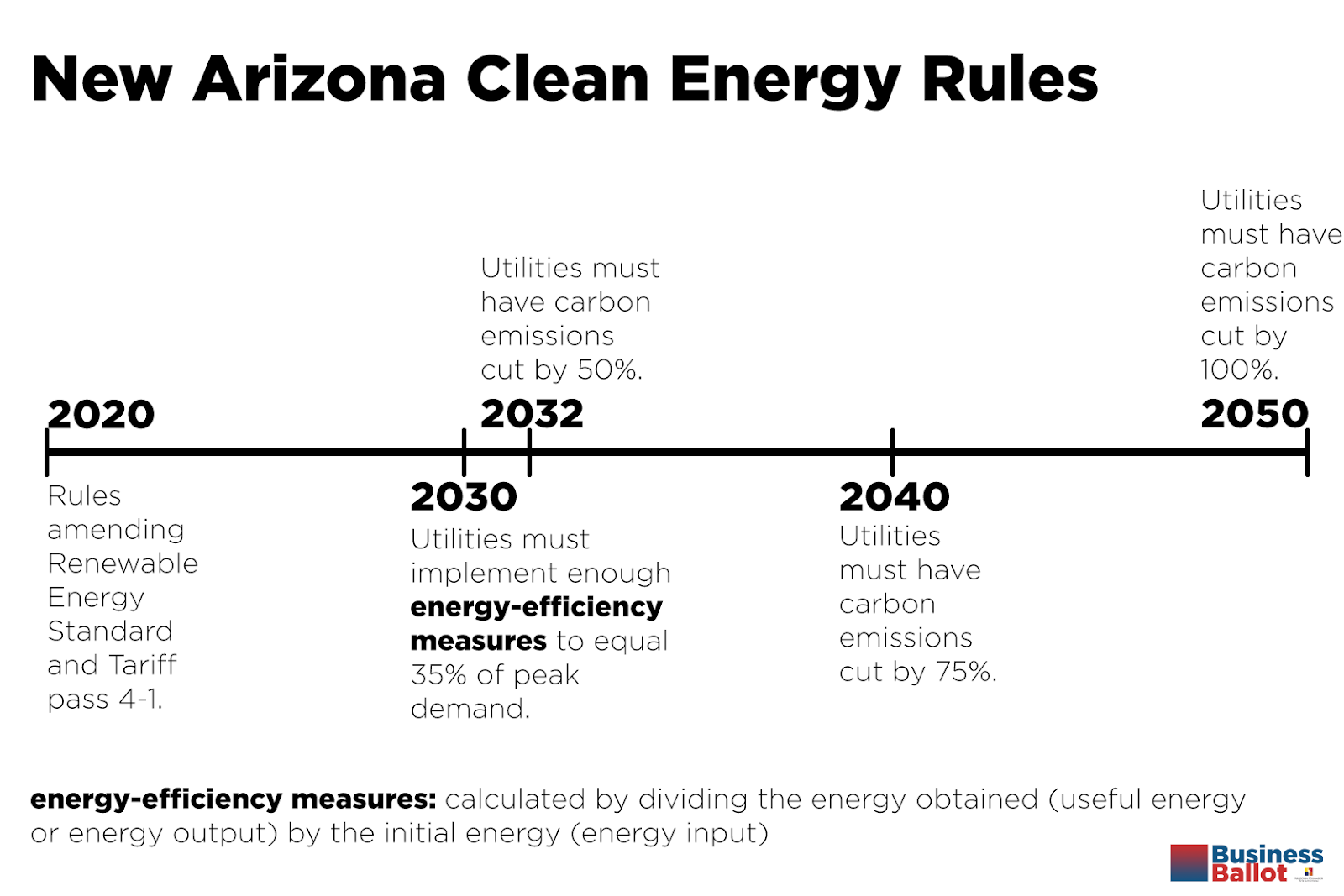 The rules “require that energy storage systems make up 5 percent of those utilities’ total grid capacity by 2035 and that 40 percent of that total be customer-owned or leased,” as well. Arizona Public Service (APS), the state’s largest utility, already resolved to accomplish this goal before the Commission acted.

Embracing carbon-free sources of energy such as nuclear power, as well as traditional renewables such as solar, wind, hydro, biomass, and more, the new rules stipulate that “Utilities still can meet the carbon-free rules by using renewable energy, and also by relying on nuclear power and energy-efficiency measures that help customers reduce consumption.”

Aimed at improving communities that are traditionally dependent on coal power, the new rules also establish “a transparent and accountable planning process that includes preference for the purchase of clean energy from Tribes and coal-impacted communities.”

In order for all these rules to be properly implemented, the Commission has sent a notice of the proposed rule change to the Secretary of State’s Office. Next, the Commission will file an economic impact analysis — likely this month — and then they wait for a judge to approve the rules. Following this approval, the Commission will vote again and then the rules will be sent to the Attorney General’s Office. After the Attorney General forwards his certification to the Secretary of State’s Office, the rules go formally into effect.

Taking a “carbon-reduction approach,” the rules remain amicable to nuclear power advocates and have received support from environmental organizations such as The Western Way and the Sierra Club. 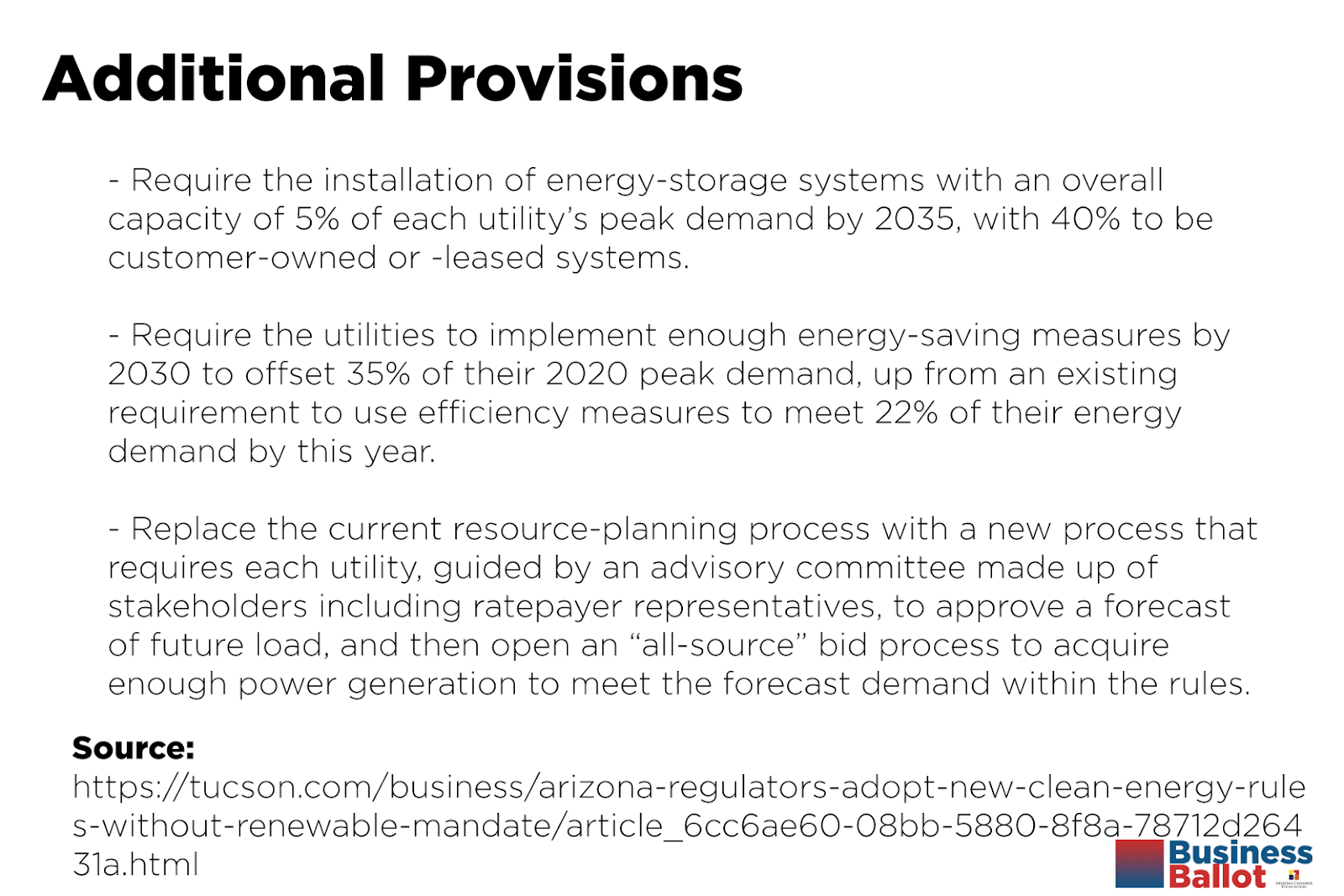 But what do these rules mean for Arizona’s clean energy infrastructure?

The Commission’s new rules differentiate between energy consumption and energy production standards. Why? There is a giant gulf between the power Arizona produces and the power it consumes.

Due to regional distributions of power and the interconnected nature of the United States, the consumption estimates are very different.

Arizona has a net energy inflow of 287.5 trillion Btu, meaning that the state consumes that much more power than it produces, illustrating Arizona’s massive power needs and its potential for increased energy production. It also lends to the hypothesis that green policymaking must consider the difference between the growth of the state’s carbon free energy production portfolio and its consumption portfolio.

Palo Verde Generating Station, the nation’s most productive nuclear power generation facility, generates enough power for 4 million people annually — all without carbon waste. The waste produced by nuclear power is minimal and it is storable, meaning that unlike greenhouse gases it can be compartmentalized and stored away. Further, modern regulations on domestic nuclear production make the possibility of reactor meltdown or failure highly unlikely.

With the Corporation Commission’s new rules, an expanding renewables sector is going to become inevitable. But some groups have rightly expressed concern regarding the increased price of relying on traditionally more expensive means of electricity generation such as solar and wind power.

Thankfully, with further investment in innovation, renewables are becoming cheaper. In June of 2020 Forbes reported that “Plummeting wind, solar, and storage prices have fallen so fast that the United States can reach 90% clean electricity by 2035 – without raising customer costs at all from today’s levels, and actually decreasing wholesale power costs 10%.”

According to a study conducted by the Goldman School of Public Policy at the University of California Berkeley, these goals will also be more feasible if natural gas production is maintained at at least 10% of electricity production. Natural gas is not carbon free, but it does produce significantly less waste than other energy sources such as coal and traditional petroleum.

These savings, however, will only be achieved through smart public-private investments in energy storage and clean energy infrastructure. This will include dedicating more investment towards electric vehicle charging stations, energy storage facilities, electric grid overhauls, carbon-capture technology, and innovation hubs that synthesize science and industry to pioneer new solutions.

A new report published by The Western Way, an environmental advocacy organization, and the Arizona Technology Council outlines some of the steps Arizona’s Legislature can take towards these ends in the 2021 session.