Business News / What will it take to grow food on Mars?

What will it take to grow food on Mars? From sci-fi novel to research reality, Anca Delgado says her newest project could change the course of space exploration by human astronauts.

Delgado, an assistant professor of environmental engineering in the School of Sustainable Engineering and the Built Environment, part of the Ira A. Fulton Schools of Engineering at Arizona State University, recently earned an Emerging Frontiers in Research and Innovation, or EFRI, grant from the National Science Foundation with co-funding from NASA. The project looks to address a critical aspect of traveling to far-off planets: a sustainable food source. So, what will it take to grow food on Mars?

With travel to Mars becoming a possibility in the next decade or two, Delgado says her focus has landed on a major issue scientists face.

“The soil-like material right now on Mars contains a chemical called perchlorate, which on Earth is a contaminant,” says Delgado, who also holds a faculty appointment in the Swette Center for Environmental Biotechnology in ASU’s Biodesign Institute. “The concentration of perchlorate in Mars’ soils is of a magnitude higher than anywhere on Earth. So this chemical can have a substantial negative effect on human health if food is grown in it and consumed.”

With a background in transforming carbon and chlorine compounds in water and soil using microbial processes, Delgado began looking at the challenges on Mars in a new light. The perchlorate salts that are toxic to humans are chlorinated compounds. So could a technique she had been studying for years be applied in the same way?

“On Earth, microorganisms have no problem taking perchlorate and using it for their metabolism to grow and get energy,” Delgado says. “They are doing what is called a respiration reaction, which leads to remediation of perchlorate because the microorganisms convert that perchlorate to nontoxic byproducts.”

In the case of remediating Mars’ soil, she says the microorganisms would use perchlorate as a resource, producing water and chloride from it. Compared with other food-growing operations, the bioremediation process being tested does not require extra resources that are either scarce on Mars or would be a burden to transport there.

“There is always the option of hydroponic growth of food crops. But with a significant distance to Mars and the lack of readily available water, we need a different kind of plan,” says Delgado. “If there is a possibility to grow plants directly in the soil, there are benefits in terms of water utilization and resources to get supplies to Mars.” 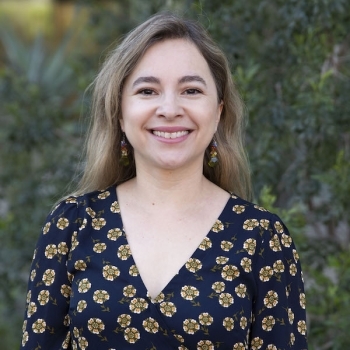 Anca Delgado graduated from ASU with her doctorate in microbiology. After spending time as a postdoctoral research associate, she became an assistant professor in 2017. (Photographer: Monica Williams/ASU)

To start, Delgado and her team of researchers will be working to create a material that replicates the ground covering on Mars’ surface known as regolith. The entire remediation process will be completed in a controlled environment similar to a greenhouse. This will allow researchers to control where microorganisms are introduced and track the output of their byproducts without leaving a lasting effect on Mars’ environment.

“For laboratory testing, there are Martian regolith simulants, which are basically inorganic soil-like materials with similar mineralogical compositions that rovers have detected on Mars,” she says. “We will then add the perchlorate salts to make it simulate that chemical composition as well.”

Microorganisms will then be added to the Martian regolith simulant to produce the chlorine and water byproducts, counteracting the addition of the perchlorates. At that point, Delgado says, microbial biomass, or organic material from the bacteria that removed the perchlorate, will also be left behind — an important step in providing organic carbon to the soil and a requirement for seed germination.

“This process is the most critical step to the research,” she says. “We will test the plant growth in regolith simulants where microorganisms have completely, or partially, removed the concentrations of perchlorate, and refine the process to convert the regolith into plant-yielding soil.”

A team of experts

Partnering with Delgado is a team of interdisciplinary researchers from around the country, including Andrew Palmer, an associate professor in ocean engineering and marine sciences at the Florida Institute of Technology. Following the bioremediation of the Martian regolith simulant by Delgado’s lab, the soil will be shipped to Palmer’s team to begin the seed germination process of growing a variety of commonly eaten plants.

“The best soils for agriculture on Earth were taken up decades ago, and so now we’re trying to farm on new land that’s not really meant for agriculture,” says Palmer. “So while this research specifically focuses on Mars, it has the ability to teach and inspire new farming techniques right here at home.”

Throughout the process, samples of the soil will also be collected and sent to Tucson, Arizona, where Malak Tfaily, an associate professor in environmental science at the University of Arizona, will conduct a series of tests to determine if the microorganisms were effective at removing the perchlorate and producing soil organic carbon. 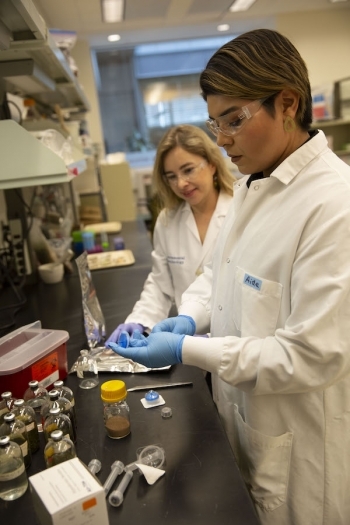 The project will use a Martian regolith simulant, and then perchlorate salts will be added to replicate the chemical composition of the ground covering found on Mars. (Photo by Monica Williams/ASU)

“Growing crops on Mars is a hard task and can’t be done alone. It requires a group of interdisciplinary scientists to tackle these global and social challenges,” Tfaily says. “Since the key goal of this project is to grow crops on Mars, we need to understand, in depth, organic matter-microbe-plant interactions as well as the social and economic implications of this. Hence, having expertise in multiple disciplines will allow us to make sure we are asking the right questions.”

The team also includes Timiebi Aganaba, an assistant professor of space and society in the School for the Future of Innovation in Society at ASU with a background in space law and emerging frontiers.

“As someone who started my career in a developing country’s space program, the question I had to answer every day was, ‘When people are dying of hunger, have no electricity or water, why should we care about space?'” Aganaba says. “With this NSF project, I finally have a very tangible answer, as it is clear that there is a connection between the concept of food security and space exploration.”

“The societal implications of everything we do in areas beyond national jurisdiction can no longer be ignored,” Aganaba says. “Scientific and technological advancements, without the potential to impact vast and diverse users, lead to innovations that very few care about or benefit from and have no real value toward advancing the greater good.”

Jean Larson, an associate research professor in the School of Sustainable Engineering and the Built Environment at ASU, will also be providing support to advance education and outreach activities related to the project. One postdoctoral researcher, three graduate students and several undergraduate students from all three participating universities will engage in the Mars soil-growing mission.

Meanwhile, Delgado says today we are working in a world where the future is now.

“I’ve been a sci-fi fan my whole life, and I think being exposed to those stories opened my mind to the work I do now,” she says. “I am proud to work at a university like ASU that supports big thinkers and collaboration across disciplines and multiple institutions.”