When ASU Assistant Professor of design Danielle Foushee was being treated for cancer at a hospital in Seattle, it was the art pieces positioned in various foyers and elevator banks – not the typical, uninspired wayfinding placards – that helped her navigate the otherwise austere and disorientating corridors. “Public art is not just a decoration,” she said. “It really made me feel at home and feel safe when I saw and recognized the different pieces in the hospital. And I think public art does the same type of thing in communities.”

Over the next several weekends, the city of Phoenix will be adding to its already significant roster of public art when Phoenix Mural Fest 2021 brings some of the most talented local artists together to paint dozens of new murals along the Grand Canalscape from 15th Avenue to Seventh Street.

Hosted by the Phoenix Mural Project in partnership with Arizona Forward and other community partners, the theme of the festival is sustainability, and all of the murals will reflect that.

The festival kicks off Wednesday, Feb. 3, with a virtual conversation about the future of water in Arizona, hosted by the Arizona Historical Society. The painting of the murals begins Saturday, Feb. 6, and the public is invited to watch the progress on Facebook and Instagram, or come in person, where all participants and visitors will be required to wear appropriate face coverings and maintain social distancing to reduce the spread of COVID-19.

Foushee lived in several cities across the country before finally settling in Phoenix after a chance encounter with local muralist Lalo Cota during a walk around the downtown area while visiting the city for a conference in 2015.

“I’m sure he doesn’t remember, but he was painting on the side of an old building that was about to be destroyed, and he told me he wanted to paint one last mural on it,” she said. “On the one side, he was painting a woman with her baby, and on the other side of that same building was this mural of a big, white jackrabbit in the desert eating a prickly pear taco, and it was holding up a sign that said, ‘Welcome to downtown.’ I’d never been to Phoenix, but when I saw that mural, I just felt like this is where I want to be.” 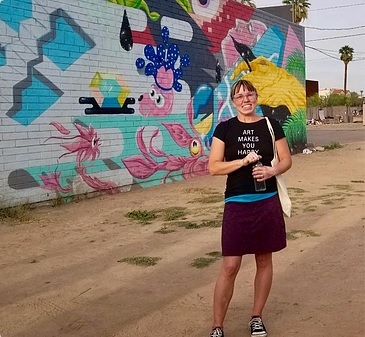 As luck would have it, only about a month later, Foushee saw a job posting for the position she now holds at Arizona State University. As soon as she arrived in the Valley of the Sun, the first thing she did was put her feet to the pavement.

“I have always been a walker, no matter where I’ve lived. So I started walking as soon as I moved here to see what was around me, and it was murals. Except I couldn’t find any information about the murals,” she recalled.

Thus began the Phoenix Mural Project. Since then, Foushee has been documenting and geotagging every mural she comes across in the city. To date, the project website lists more than 700 murals, with photos and artist information when possible.

Though she’s a not a muralist herself (her work tends more toward the sculptural), Foushee believes in the importance of lifting up whatever form of art is embraced in the place you live. She has even incorporated Phoenix’s murals into a special topics elective course she taught on street art.

“I think that people think of Phoenix as just like, a sprawling desert nothingness,” she said. “It’s also sort of isolated, in terms of arts and culture, so I think that’s another reason it’s taken longer for people to notice. But I think it’s that unique cultural mix here that is really interesting. And we don’t have these big names like Shepard Fairey here yet, so I wanted to document our street art culture before those guys start showing up and taking over.”

The idea for this year’s mural festival came when one of the Arizona Forward subcommittees was brainstorming ways to beautify the Grand Canalscape and encourage citizens to use it. Arizona Forward is a 50-year-old nonprofit committed to leading the charge for sustainability in the state. Alexia Bednarz was one of the members of that subcommittee, and she happened to know Foushee through her husband, who works at ASU.

“We just thought the canal was a little hard to navigate,” Bednarz said. “People don’t always know where to enter and exit, or what’s nearby. So we were trying to think of ways to create better wayfinding, and we realized public art can do that. It can create a sense of place and tell people where they are.”

With Foushee on board, wrangling as many artists as she could to participate, Bednarz met with the various neighborhood associations along the canal for permission to paint the cinder block walls that separated homeowner’s yards from the canalscape. She was met with “a resounding yes.”

“Aside from beautifying the area, we’re also hoping to remove some of the stigma from the canal,” she said. “They sometimes get a reputation for being scary or unsafe, but that’s just not true. Plenty of cities have canals that are beautifully scaped, that people turn their front doors toward. So we see this as a way to help in placemaking, wayfinding and connecting communities.”

The festival will conclude with a grand finale celebration on Saturday, March 6, where attendees can visit the brand new Savidan Art Gallery to view some of the muralists’ smaller works in an exhibition titled “Painting for the People.”

“When I see public art,” Foushee said, “like, when I go out and I see Lalo’s chihuahua on the side of a building in my neighborhood, it makes me feel like, ‘Yeah. This is home.’”