The housing market has surged in the past year or so, and it shows no signs of slowing down. Homes are disappearing off the market faster than they have in years, and they are selling for more than before. According to a recent Realtor.com study, October 2021’s median listing price was $380,000. That’s a 22% increase since the start of the COVID-19 pandemic. In such a quick-moving atmosphere, buyers have had to adjust their expectations a bit when it comes to buying their dream home.

So what are the deal-breakers for Americans when it comes to buying a home? To answer that question, we surveyed nearly 2,000 homeowners, all of whom have bought their homes within the past five years.

• The biggest deal-breakers when looking for a home are exterior issues like bad siding, weatherproofing issues, and a significant number of repairs needed.

• Price, home size, and an updated kitchen matter most to buyers.

• Of those who bought a home during the COVID-19 pandemic, 86% said it was a stressful experience, and 84% said they decided more quickly than they were comfortable.

Buying a Home in Today’s Market

Nearly three in four recent homebuyers reported a stressful homebuying experience. Prior to COVID-19, just 60% of those who purchased a home said the experience was stressful.

Before early 2020, prospective buyers were able to take more time to research a home before making a decision and they viewed more houses before purchasing. Of those who bought prior to the pandemic, 58% viewed five homes or less, and 31% of buyers viewed as many as 10 properties. The number of homes viewed decreased dramatically for buyers during the pandemic, with nearly three in four homebuyers viewing five or less.

Pre-COVID, only 48% of buyers said they made a decision more quickly than they would have liked. Typically, this pressure came from their realtor or owner of the home. The competition wasn’t nearly as daunting, either. Only 31% of buyers lost a bid on another property.

Of those who found their home during the COVID-19 pandemic, 86% said it was a stressful experience. Three out of four people viewed five homes or less. This could be led by the rapid speed at which people are buying homes. In fact, 79% of recent homebuyers lost a bid on at least one other property.

Because of this competitive pressure, 84% said they made a decision more quickly than they were comfortable. When asked, homebuyers stated that most pressure (67%) came from the owner of the house. However, 57% of homeowners stated that their partner drove the stress.

The Biggest Deal-Breakers for Homebuyers

Even with this competition, there are several deal-breakers that will cause buyers to pass on a property.

The most common deal-breakers are: 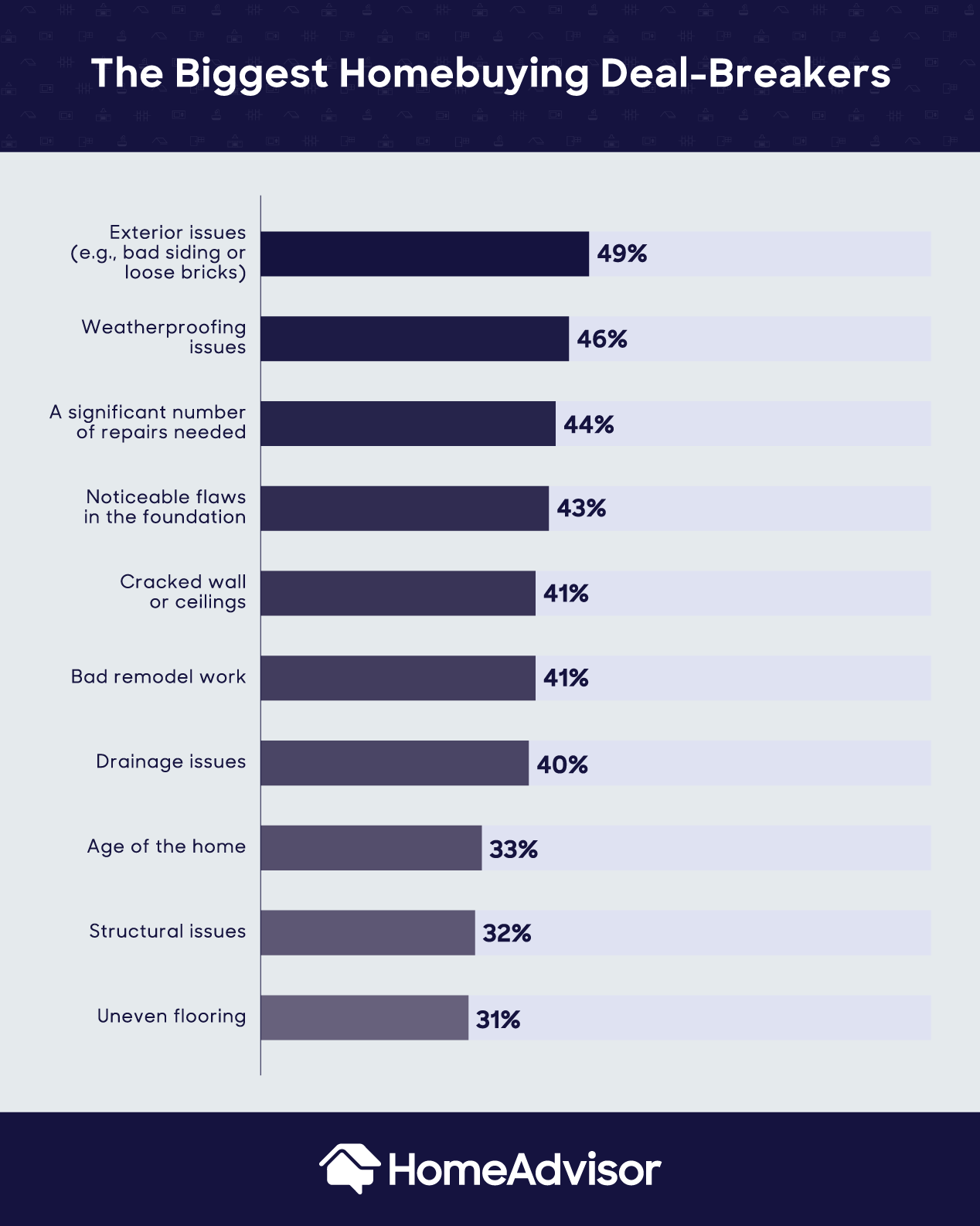 However, homebuyers are not turning away homes just because they need some work. The following reasons were the least likely to dissuade buyers:

You can remodel a home and hire local lawn care professionals to fix outdated landscaping. But at what cost?

Price was the most important factor for homebuyers, and the size of the home was nearly as important. Yet, over 60% of responders said they’d go over budget. In fact, one in four were willing to go over budget by more than $100,000. 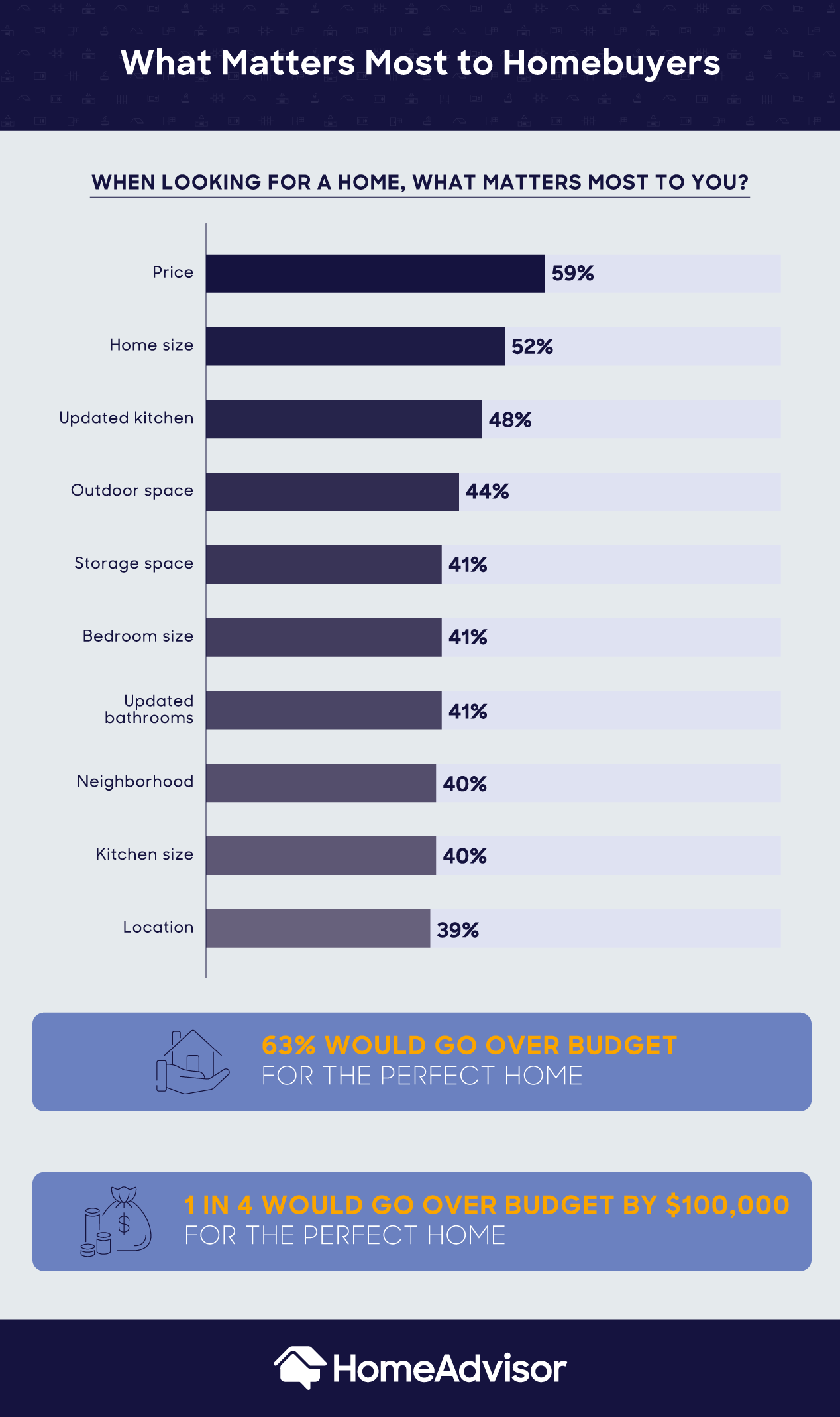 For homeowners that work from home, 76% needed dedicated office space. The pandemic has shifted many jobs and routines back into the home, and homebuyers are looking for properties that can meet their requirements more than ever.

What Are Homebuyers Willing to Look Past?

In addition to size and cost, how much do a home’s history and location contribute to homebuyers’ willingness to purchase it? We asked what types of homes buyers would pay market value for, and which homes they wouldn’t buy at all. 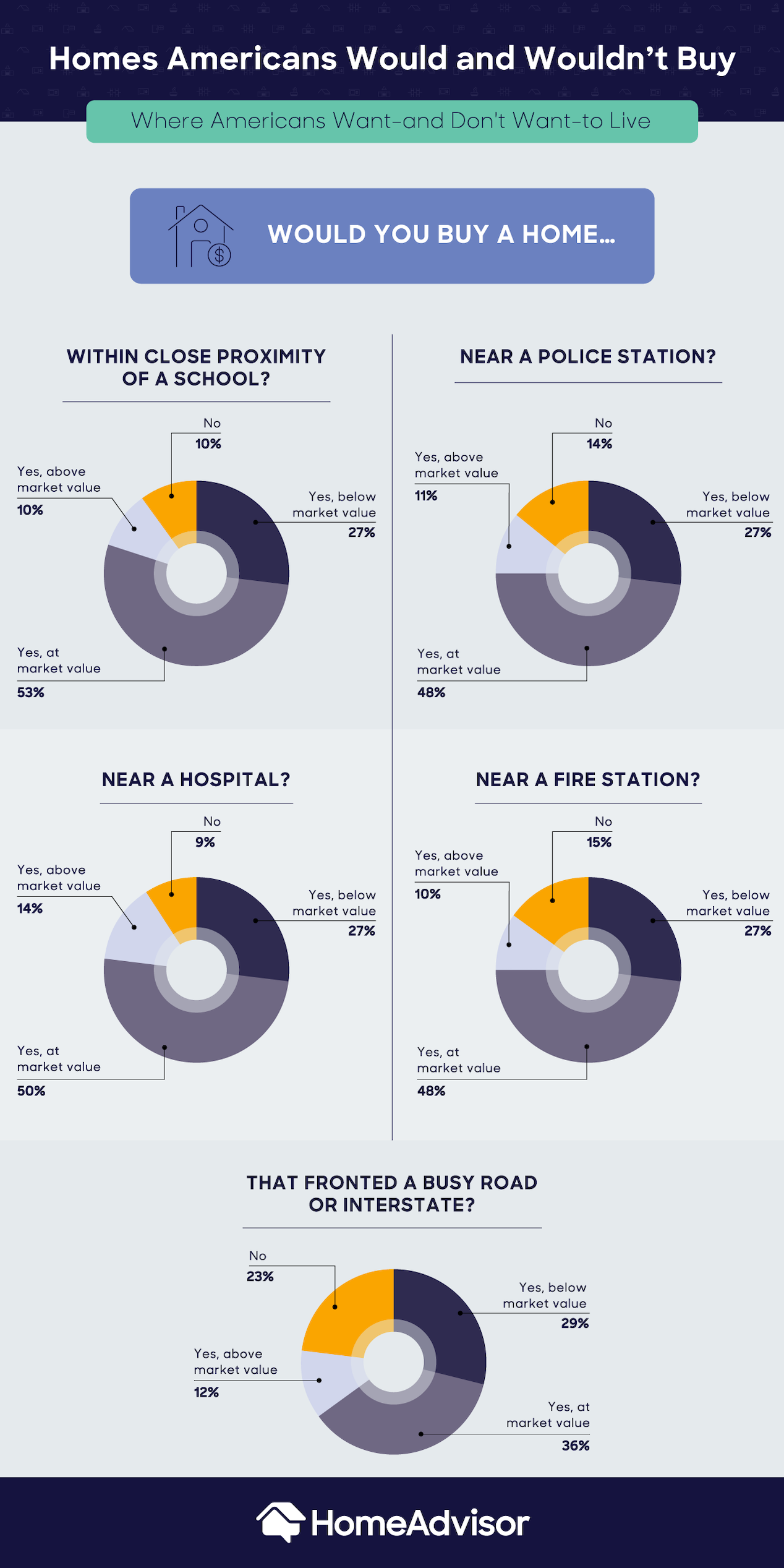 Nostalgia can be a powerful influence. Almost 65% of buyers would pay at or above market value for their childhood home. Likewise, 63% would do the same for a home that their parents grew up in.

Plus, staying local (or returning home) has many other perks. With the help of local professional moving services, homebuyers can eliminate the stress of moving and end up in a home that already feels comfortable and familiar

Around 90% of buyers wanted a home within close proximity of their parents or their partner’s parents and 66% would do so at or above market value.

What Are Americans Looking for in a Home?

In short, homebuyers are looking for safety and comfort. They are not afraid to get their hands dirty or hire a home improvement professional to fix minor issues. However, major issues like damage and structural problems can dissuade them, and an old kitchen won’t win any favors, either.

Purchasing a home during the pandemic has proven to be a stressful experience, with the majority of homeowners (84%) making a decision more quickly than they were comfortable with, and 79% losing a bid on at least one property.

Given the low inventory and pressure to make decisions quickly, it’s important for prospective homebuyers to understand their dealbreakers, considering not just the home itself but also the neighborhood and environment.

Methodology: Between November 24 and 27, 2021, we surveyed 1,792 homeowners about their biggest deal-breakers. All respondents had purchased their home within the last five years: 67% owned a single-family home, 16% owned a townhouse, 10% owned a condominium, 6% owned a multifamily home, and 1% owned a co-op. On average, the homes had 2.5 bedrooms and 2 bathrooms.