The Tucson MSA also experienced strong gains year to date through September, with total permits up 17.6%. Single-family permits increased 27.0%, but multi-family activity was down 19.4%. 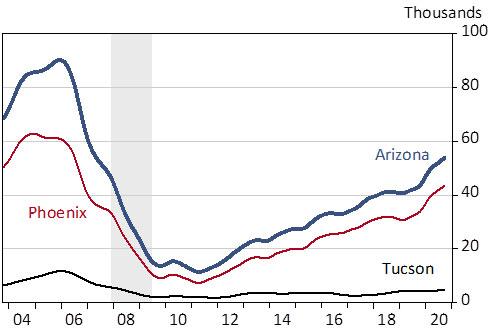 The Arizona Department of Employment Security reports that they have paid out $11.9 billion in benefits from early March through October 24. The Arizona UI Trust Fund balance fell to $163 million.

Note: The official Initial Claims for Unemployment Insurance numbers for the U.S. are released every Thursday morning covering the week ending on the previous Saturday.

The travel and tourism sector remains mired at low levels of activity.

Seated diners at restaurants using the OpenTable app stabilized during the week ended October 31 in Arizona and Phoenix at 26.1% and 47.1% below last year, respectively.

These data show year-over-year seated diners at restaurants on the OpenTable network across all channels: online reservations, phone reservations, and walk-ins. For year-over-year comparisons by day, we compare the week ending Saturday to the same week in the previous year. this dataset is based on a sample of approximately 20,000 restaurants that provide OpenTable with information on all of their inventory.

Travel to retail and recreation places tracked by Google Maps has been modestly trending up for the past couple of weeks, but remains well below activity in January. There has been a similar modest improvement in travel to work.

New business applications in Arizona rose to 570 for the week ended October 24, up 29.5% from a year ago. That pulled the 52-week average up as well, to 8.7% above last year. New business growth may be reflecting job loss associated with the pandemic, as newly unemployed residents seek to replace lost income through new business ventures. While these applications are considered likely to result in new jobs and associated wages, there is no guarantee.

To view the above datasets in graphical and tabular form, we track them in detail continuously on our COVID-19 Indicators page.