Lifestyle / Have humans reached the limit of athletic potential?

Have humans reached the limit of athletic potential? Citius, altius, fortius. For those of us who avoided Latin in high school, that translates to “faster, higher, stronger,” and there couldn’t be a more fitting official motto of the Olympics. For more than 100 years, athletes have been consistently setting new world records, shattering expectations about the limits of human athletic potential.

But at some point, despite advancements in training, equipment and nutrition, we must max out our athletic potential for speed, height and strength — right?

If you ask sports historian and ASU Clinical Assistant Professor Victoria Jackson, she thinks we still have a long way to go; especially women.

A former NCAA national champion and Nike-sponsored professional track and field athlete, Jackson writes and speaks about the intersection of sport and society, exploring how the games we play (and watch) tell us about ourselves.

In anticipation of the July 23 kickoff of the delayed 2020 Games, Jackson shared her thoughts on where we’re at now and what may come in the future. 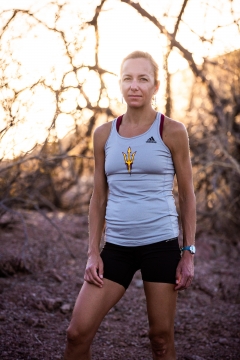 Question: Are humans as a species at the height of athletic performance, or do you think there are still new records we can set?

Answer: I think we’re definitely not maxed out. And women in particular have just started in the grand scheme of things. I’m not all that old, and one of my friends from high school, Ann Gaffigan, won the Olympic Trials for the 3,000-meters steeplechase in 2004 and didn’t have an event to go to because it wasn’t an Olympic event for women yet. This is only the fourth Olympics that have had the women’s 3,000-meters steeplechase as an official event. So if we’re thinking about women, we’re going to be breaking records for a very long time.

If we’re thinking about men, it’s true that some records have been around for a while, but then, some records have asterisks because of the use of performance enhancements, and our ideas about what it takes to train are ever-evolving. Performance science is still a relatively new field with things like technological enhancement and gene-doping to consider. And those types of innovations are only going to continue. Even information technology has made a huge difference across the spectrum, from high school to collegiate to professional levels of sport. It used to be that you only had a kind of theory of how people were training in other states or countries, or maybe you could read about it in a magazine. But now you can see video of it and look at data about it.

Q: As you mentioned, a variety of factors – from better nutrition to better technology – have contributed to better athletic performance over the years. Is there any one factor that has made the most impact, or is it a combination of things?

A: Women being allowed to participate in certain sports is definitely a single factor for them. But in general, I think it’s a combination of things. Sometimes, in the past, the sharing of knowledge was actually the opposite of beneficial to performance. Because, for example, you’d have a camp of coaches who thought interval training was all you needed to run faster, without any science behind it. We know now that’s not true, and a lot depends on the individual athlete. We can do things like monitor bloodwork and nutrient levels constantly. Also, there’s much more focus on rest nowadays; the ability to maximize rest so that your body can tolerate more training is an area of emphasis for athletes now that wasn’t thought about in the past.

Q: Can we expect a certain level of acceptance of new innovations in performance enhancements to contribute to athletes achieving new records in the future?

A: Yeah, you know, I think what we’ve learned is that anti-doping is impossible. There’s a certain amount of privilege at play in Western countries when it comes to that; we almost fetishize technology and look down on what we see as more rudimentary forms of doping. But technological doping often comes with a higher price tag. You can sleep in a hyperbaric chamber to increase your red blood cell count and feel justified about it because you’re using technology, but someone from a less well-to-do country who uses EPO injections to do the same thing is looked down on. There are genuine health concerns with injections as far as contaminated doses or needles, but if it’s a safe process, essentially it’s just a difference in methods to achieve the same outcome. So I see problems with anti-doping as far as blaming athletes for trying to compete at a level that the systems within which they live don’t allow them any other options.

Q: When we spoke back in 2019 about the “Sports, Cultures and Ethics” certificate, you said that sport can serve as a window into society. What does it say about society that we’re always pushing our athletes to achieve more?

A: I think it’s a good thing to want to be the best version of yourself — to see how fast you can go, how far you can throw, how high you can jump or how perfectly a team can work together. There’s something beautiful about that, about pushing ourselves to our limits. In one of my classes where we explore limits, I assign a podcast from RadioLab about these two women who have had notoriously epic finishes at the Ironman competition. One of them was trying to crawl along the fence at the end because her body just gave out. It’s amazing to hear how it never occurred to them to give up. So I think there’s something really incredible about humanity that we can learn from watching athletes try so hard to be better.

Q: How much does someone’s socioeconomic background influence how much they’re able to achieve in sports?

A: It plays a huge role. The resources and the time it takes to be able to develop into a competitive athlete in the 21st century can often be incredible barriers depending on one’s background. At the youth level, there are lots of really great programs and nonprofits to get kids involved in sports because of all the benefits, mentally, emotionally, socially and physiologically. But children from higher socioeconomic backgrounds are still at an advantage because their schools are a reflection of residential segregation, and that’s nationwide. When it comes to elite athletes, a lot of people don’t know that many athletes training for the Olympics are living below the poverty line due to the resources it takes to train, never mind all the traveling and other expenses. And there are gender dynamics at play, too, with women having to plan pregnancies and child care around competitions.

Q: What do you foresee for the future of the Olympics as a global event?

A: That depends on a few factors, like whether national contests will still matter or who holds status as the global superpower. In a way, sport is a proxy for actual war. What really catapulted the Olympics into the major TV event we know today was the global superpower rivalry that was going on around the time of the Cold War, which was also the dawn of the Golden Age of TV. Sport saved the world during the Cold War; instead of shooting missiles and potentially annihilating the planet, we went to battle in a sporting space. But the popularity of the Olympics is not guaranteed. I don’t know if the Olympics will be around in 50 to 100 years. The Games as we know them today are really only just over 100 years old, and they look nothing like they did in Athens in 1896 or in St. Louis in 1904. So this idea that they exist and therefore will always exist certainly isn’t a hard fact.

Q: What are you most looking forward to at the 2020 Olympic Games?

A: I really wanted to see Sha’Carri Richardson. It’s just so unfortunate how that all played out. But she is running at the Prefontaine Classic, which is part of the Diamond League international circuit. So at least she’s still competing. American women are rocking the steeplechase in the global competition. Ryan Crouser, an American shot putter, broke the outdoor record at the Olympic Trials. I’m interested to see what Gwen Berry does if she makes it to the podium in Tokyo. I think Allyson Felix is going to have global support in a way that we rarely see at the Olympics because of all the advocacy work she’s been doing off the field, and also because she’s one of the most decorated female Olympians in track and field history, along with Merlene Ottey. Obviously I like track and field. Simone Biles is obviously going to be amazing to watch, and the whole U.S. women’s gymnastics team. There are a lot of great storylines there. But yeah, I’m always most excited for track.